My Latest Invention is by Far My Greatest and Fulfills Something of My Destiny and YOURS TOO!!!

First, I have to start with the disclaimer: Nothing I say here should be interpreted as medical advice, a cure mitigation, a diagnosis for disease. Aging is not considered a disease by the powers that be, but any claim to affect aging and healthspan will not be here. Because even though medical applications require diseases to create those claims, the alphabet agencies will just as soon throw me in jail for anything that remotely looks like a disease statement.

I will tell you the facts about telomeres, telomerase, and my new telomerase activator.

I want to share this with you first, and only you because you are in a small group of great customers that have expressed interest in my mission of lengthening life and HealthSpan.

Over two years ago, I found a brand-new compound that turns on the enzyme telomerase. In its raw form, it was already superior to the current gold standard. But I knew I needed to extract and purify the active ingredient to get the most activity out of this discovery.

And speaking of discovery, so that you know, this all-natural molecule IS NOT like anything else that is being sold out there and is in a completely different chemical class. But this is not merely another copy cat molecule but something brand new and different.

I will never forget the conversation I had with one of the significant marketing players in the field when I made the obvious statement, “I am sure the Good Lord didn’t put just one telomerase activator in the planet!”

His response was something like, “Well, so far, no one else has found one!” You can say whatever you want about the massive hubris of that individual, but the truth is I already knew I had something even then

What I didn’t realize was the time, the money, and the obstructions that would hold off the completion of that molecule for the next two-plus years.

But it is so important and so influential a discovery, and right up my “alley” as a telomere expert that I had no choice but to bring it to the world.

I do not use the word destiny lightly.

My mission, inspired by my Dad’s untimely death, has always been to reduce the suffering, infirmity, and difficulty associated with growing older in our society. The other side of that has been to live as long, healthy, and capability as possible. I believe biologic age can be stopped or reduced at least for a time, and I firmly believe the simplest most accessible way to achieve this is with telomerase activation.

Telomeres act as the biologic time clocks and tell your cells how much time is left. In the process of telomere loss and telomere aging, something called telomere dysfunction happens.

Telomere Dysfunction can lead to impaired energy generation inside the cell, which means the cells are unable to make healthy new cells.

With unstable genetic material and the cell not able to self-propagate, the outcome is an increase in inflammation from the inside out (as opposed to bad diets, lack of sleep, lack of or too much exercise, etc.). This inflammation is a foregone conclusion of aging and telomere loss; thus, the more you age unless you stop the process.

Telomere lengthening has been shown to stop these processes again from the inside out, improving both health and longevity in species tested and NOT to increase the incidence of cancer.

All you have to do is go to Pub Med and type in “telomeres and longevity,” and you’ll get a bevy of studies that back up what I just said.

Now here is something else you should know about my new compound.

It has been shown to inhibit viral replication and improve T cell response (immunity booster). Tested against the following cancers, Pancreas, Colon, HS breast cancer, it virtually clears the plates of cancer at a nontoxic dose in 24 hours. BUT BUT BUT do not interpret this in any way as a cure for viruses or cancer. I am merely telling you what I consider interesting initial reports that need massive amounts of more testing. Again, I am not telling you this compound does anything to mitigate diagnosis cure affect or otherwise inhibit cancer growth or viral growth outside of our laboratory findings!!!!

The telomerase activity was initially reported as being 2-3X the gold standard in TRAP assays, and more importantly, it added three other passages to our stem cells in culture.

What does this mean?

Stem cells are your parts bag reserve and are often called in to help heal unhealthy tissue or to replace sick dead and dying cells when the healthy cells at the site are not up to the task. They are a significant component of what I call your “Repair Ability,” and they “buy you runway” in terms of health and longevity from what I have seen.

Being able to keep your stem cells younger longer if only in culture suggests that we may be ready to de-age these cells in your body as well, allowing you more capacity to repair and regenerate healthy tissue.

More time is needed to prove that, but I have been taking this compound I call Telokynase for over a year to see its effects and safety.

I would love to see you age backwards like me!!!

Here are the particulars:

You know if you have read any of my stuff since I wrote the book “The Immortality Edge” back in 2010, how massively essential and life-changing telomerase activation can be.

I am living proof. But I want you to be as well. After all, it gets lonely when there is no one to play with.

How cool to have more life and health to play with? 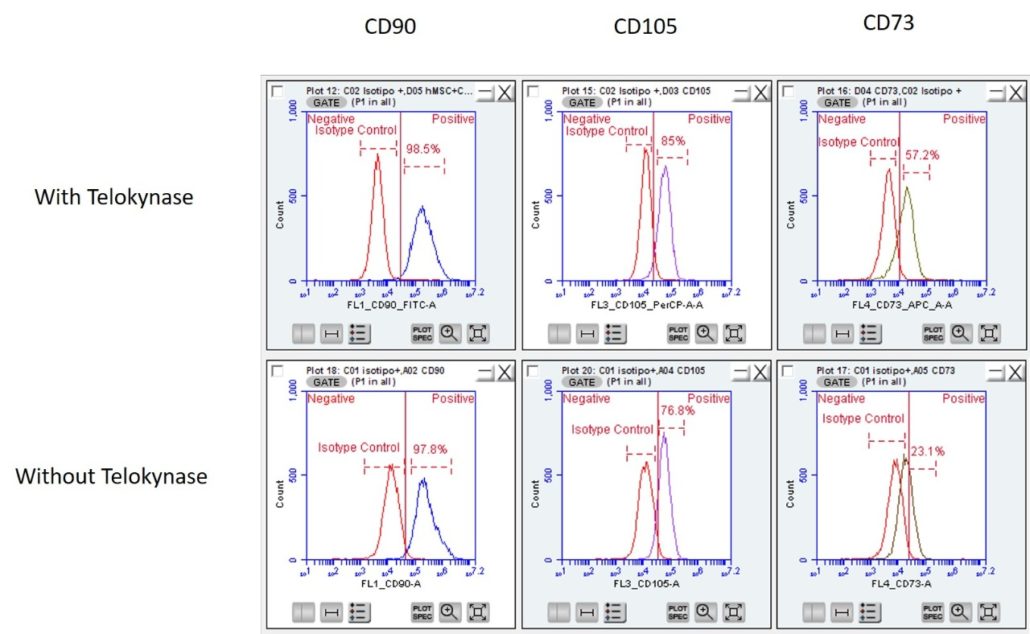 The above graphs show the effects of adding Telokynase to populations of differentiated (mature) mesenchymal stem cells. The persistence of each of these markers shows the maintenance of “stemness” in these cell lines as compared to non-treated cell lines. What this means in English is the following.

Stem cells to not stay stem cells forever when they are called upon to repair and replace tissues in the body. While some of them are kept in reserve and can, at least in young people, continue to repopulate themselves to degree there comes a time in the life of all people and all stem cells when the aging process decreases the number and activity of effective stem cells.

For instance, a new born may have 500 million circulating stem cells and a large reserve. By age 35 this number may have decreased by 30% By age 60 it may be reduced to 100 million cells and decreased activity.

Maintaining the youthfulness and the ability to product more differentiated cells and stem cells indicates a “Youthing tendency” due to telomerase activation and other factors. WE do include new born stem cells as a comparison. Obviously, nothing compares to these but making your own cells behave younger is what I call “Buying Runway” and is in my opinion one of the most effective ways to maximize your “Staying Younger and Healthier” program!!!

None of these statements have been evaluated by the FDA and are not intended to be taken as medical advice or substitute for same. They represent the personal opinions and actions of Dr Dave and his scientific staff!

Be the first to review “Telokynase” Cancel reply