You can purchase individual bottles here.

As an Anti-Aging Doc who specializes in helping people do things that will help them age better and better I have long known the need for an efficient and bullet proof energy system in the body.

Power, Strength, Endurance are the Gold at the End of The Energetic Rainbow!!!

They also trend to buffer you against the ravages of aging, help you compete and even stand out with people far younger than you when it counts the most, and of course impress your friends, loved ones and collegaues while setting an example of what we can all aspire to.

I personally have real problems when I look out into an audience of Anti-Aging docs and I see pale obese non-energetic people!  Walk the walk for god sakes.  I am not sure how people like this feel they have the right to command your attention and your faith!!!

Worse, in spite of big guts, the butts have disappeared completely in the classic “old man with no butt syndrome”. Women have a different problem but lose strength in the butt and hip flexors just the same.

These are the people who, when they sit behind you have to grab your seat to steady themselves from falling into the chair and have to smack you in the back of the head and jostle your seat when they get up because they have not enough lower body strength to stand up from a seated position! *

Now this is about you not me but let me relate a few stories to you that illustrate the point.

When I was 50 I completed the 125-km race through the Canadian Rockies known as the Canadian Death Race.  Last year a man 12 years my junior was at once horrified and inspired when we both took a body composition test at one of the conferences.  My body fat, muscle mass and VO2 were significantly better than this younger man from another generation.

“Dude you’re a stud!” he exclaimed!

Last week I got an email from a 25-year-old friend in the armed forces who is currently deployed in the Middle East.  He detailed his training program for me as he was hoping to redeem a pre-deployment embarrassment caused when he could not keep up with me for 5km.  He is less than half my age!

Again, I tell you this not to brag because I have a sneaking suspicion that if you did what I do and had the supplements etc. that I have, you would be the one doing the ass whipping on me!

I will tell you about that in just a moment but let me tell you the non-vanity based issues we ALL face as we age.

Have you ever looked at an old person and wondered if that would be you in a few years?!

It can be a scary proposition and we all have seen people who are our age, maybe we went to school with, who look bad and feel worse!

Now if you are interested in aging slower, better and with more grace Sarcopenia and Dynopenia are some things you want to avoid for sure!!!

There are several ways to do this including gene therapy (that is a 6-figure investment) steroids (that is fraught with expense as you should only do it with an anti-aging professional), stem cell therapies (not available for this purpose in the U.S.

In short, there are a lot of expensive difficult, potentially dangerous and expensive ways to handle this problem. The only relatively easy way to mange it is to exercise often, hard and with intensity.

Now I don’t know about you but as I approach my 6th decade on this planet, often, hard and heavy are not as easy as they once were. If ask other men and women over 40 you will generally get the common comment of, “My recovery times are longer and I can’t do as much as I used to.”

This comes at a time in life where you actually should be doing more, not less to keep Father Time off your back!

Now, if you’ve been with me for a while you might remember the first energy generating substance I developed call “Regenerizer”.  Regenerizer was a blend of what was best back in 2004 and it did work. But as I went on with my life and the years passed by I found it worked less well FOR ME. And as you might also know I do this first for me and am always the guinea pig for everything I make.

Lots of people miss that old supplement and have asked for it by name since I started my new business.

Well I now have a NEW and I think vastly improved energy formula that fits in with my new research and my new thinking. 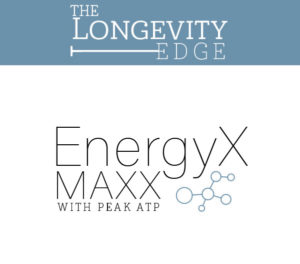 You might also recall Toco Q which is still brand new to our supplement line. That supplement is designed to improve mitochondrial function and reduce free radical damage and uncoupling in the energy system of the cell.  The mitochondria are super important and if you ever wonder why so many diseases of aging have both no known cause and no known cure, its because metabolism, specifically the role of the mitochondria in metabolism has been ignored!

Toco Q works on a specific part at the beginning of the energy generation chain.

My new Supplement called Energy X MAXX works on the very end of that chain, specifically the actual currency of energy itself, ATP.

Now the specific brand I am using in my blend is scientifically tested and proven to improve those things. It is called PEAK ATP and as an isolated compound is very popular with ALL athletes- Power, Strength, and Endurance alike, because it contains no questionable substances and is not banned by any organization.

OK by now you probably intuited the “look better, feel better and DO Better” aspect of things but we started with me telling you about aging.

Well you remember those fancy words Sarcopenia, and Dynopenia- loss of muscle and loss of strength that plague us as we get older?!

If you can do more, harder, longer with more intensity and recover faster, you have a huge advantage in your battle against these age-related conditions.

And You CAN Look Better, Do Better and Feel Better in the Process.

Heck, don’t be surprised if you drop some serious body fat along the way!!!

So that is my great new replacement for my old energy supplement and one which fits perfectly with my other supplements including Toco Q, and Sugar Balance Support Formula (SBSF)

If you are ready to Unleash the Athlete within you get on it Now!

Answer: the product has an enteric coating that delays absorbtion (small intestine) while improving the overall delivery

Answer: there are 90 caps per bottle and the typical dose is 1 cap on an empty stomach between meals.