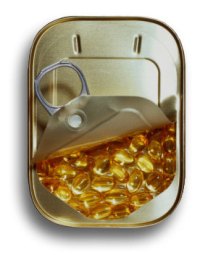 In this part of the blog I go into even more detail debunking the arguments that seem to have gathered steam on the internet.  It is irritating because it represents “negative sales tactics” which try to capitalize on “bad news” that will shock you because it “challenges everything you know about –insert your favorite topic–“.

This is a well known sales tactic and in today’s Internet-based, opinion-rich, information-poor, sound bite climate, people know most of us won’t read past the headlines (micro scripts) much less try to find out the facts behind what is being said. And if you add a little bit of ‘sciency’ sounding stuff, you’ve convinced 99.9% of the population.

Warning: I don’t do a little sciency when I debunk. I do A LOT SCIENCY and the following is that; so you’ve been warned!

Here is an interesting email from a victim of today’s technology and a well-meaning but misinformed anti-ethyl ester fish oil campaign.

They say Omega 3’s are best when delivered in their natural state – be it in fish oil capsules or from eating fish – not the form that you sell, advocate and defend…

The environmental impact of the Norwegian industrial fishing industry is devastating…

Ethyl esters are not effective in the reducing the risk of heart attack or stroke…the many large, protracted studies are now showing this…

We should be as outraged about ethyl esters in our food supply as we are of GMO’s…”.

Hi, Phillip. Lately I am seeing more and more of this. I even recently spoke a t a conference where the guy before me said exactly the same thing since he was selling “natural triglyceride” formulation fish oil. The problem is that it is 100% wrong.

1) The largest fish oil trial ever done was GISSI Prevenzione and they used ethyl ester fish oil with fabulous results.

2) Ethyl ester are a naturally occurring intermediate between triglycerides and Phospholipid formats of Omega 3 and have biologic value of their own, separate from the other two formats.

3) EE’s have a unique 24-hour absorption curve instead of the spike-like absorption of the other formats of Omega 3, making them the BEST choice for someone wishing to get maximum cardiac coverage. EE’s are in the blood stream for a full 24 hours.  Most heart attacks happen in the early morning, 18 to 22 hours after most people take their daily dose of fish oil, which (at least theoretically) puts them at risk with “natural TG products”. Phospholipid formats have not been evaluated in any large clinical trials similar to GISSI.

4) ALL TG products and P’lipid products can and do pass back and forth through ethyl ester formats as the body needs them to; so saying otherwise merely shows the ignorance or duplicity of the people making that statement.

5) Ethyl esters are free of the toxins and much more potent in terms of EPA and DHA than “natural” TG products, which cannot exceed 30% EPA and DHA and are subject to the exact toxic mixture of the oceans or streams they are harvested from. In addition, whenever the krill people try to show superiority over fish oil, which they have yet to actually do, they choose the wimpiest format they can – natural triglyceride – so they have the best chance of looking better. They would not dare compare clinical outcomes to my Ultra 85 for this reason. No matter what the “parent oil” people say, the only Omega’s that matter are DHA and EPA. This is a simple fact of human biochemistry since this is what the body does when it needs Omega 3. All other forms are either intermediates to get there or are simply used for calories. The latter does not happen very often because people are mostly Omega 3 deficient.

6) Other than the fact that the Norwegians are not the suppliers of all of the fish oil that is used, I am not sure what real impact it has – economic, yes — environmental? If less Norwegian fish are being used, which may be true, as most of the fish now used are from other waters, as in the case of my Ultra 85 are fresh water sourced from non-endangered species. The molecular distillation process is low heat (135 F – the oxidation point of fish oil is 253 F) and has essentially a zero carbon footprint – at least the way we do it.

7) There was one study done recently showing the “failure” of Ethyl Esters as a potential agent to treat hypertension. This study got a ton of “airplay” on the Internet and was immediately picked up as a marketing tool for the ‘just eat fish and natural triglyceride’ sales force. However that study had gigantic flaws…

a) It used a mouse model with a SNP to create hypertension. In humans HTN is polygenic.

b) Even though it was reported as “Fish oil no good for…..”  it did not include the better part of fish oil, which is EPA, in the evaluation.

c) It completely (and I think embarrassingly for the people that published it) overlooked one gigantic fact: Mice are herbivores and people are omnivores. The way the different species use Omega 3’s and 6’s, the tissue % of EE TG and P’lipids, the eicosanoid and other active derivatives are ALL different in mice and humans, so generalizing a dietary intervention as being relevant is bound to be wrong. I think the brilliant scientists that did the study knew this, or at least should have! There is plenty of data to support the use of fish oil as an adjunct for healthy blood pressure.

As far as “many recent studies that show failures of ethyl ester fish oil”- many of them are triglyceride based as well, not just ethyl ester. I address the causes for this in #8.

8) Finally, as to the failure of fish oil in human studies. It can almost always be attributed to the following: Inadequate dosage, no attempt to check tissue or blood levels of O3’s and 6’s, and no attempt to achieve the levels seen in what are basically “disease free” populations. This is independent of the format of Omega 3 (O3) used but “natural” triglyceride format is most susceptible to this effect because of its lower concentrations of EPA and DHA. You have to take 3x as many of this type of “parent oil capsule” to get an adequate dose of Omega 3 to impact human health. Now, keep in mind that there is a dose response curve to Omega 3’s so even a little will show some improvements in health but nowhere near what is actually achievable.

Many of the so-called failed studies are also done with only 1 gram of some type of fish oil that is often non-specified because the researchers don’t know the difference. The usual situation is also to add them onto “maximum medical therapy (drugs)” that the enrollee has been on for years to treat a well-established condition. For more on this see my blog “Fish oil Failure by Design“.

Again, I need to stress – there are no other meaningful O3’s in fish other than EPA and DHA in the context of Western Society. The other fats are just calories.

It is sad that people can say anything they want on the internet and worse that it spreads like wildfire. Next week it will be some other nonsense by people like this. We owe almost all of our knowledge about Omega 3’s and 6’s to a relatively few PhD’s whom I respect immensely. Sadly, we also owe almost all of the misinformation to the same group of people who stare at biochemistry texts and look at where the arrows go without noticing whether those arrows go backwards, sideways or are dotted, meaning they are negligible. The original group of scientists that did all this work were very concerned and delineated as best they could what was meaningful in human biochemistry.  Many of today’s researchers seem to have lost that work or have decided to ignore it. My deepest respect for those who actually take the time to learn what those before them laid out so clearly. As for the rest, you need to get your head out of the basic biochemistry texts that show every possible way a fat can be processed and learn what actually happens in people! And, if you are going to study mice, learn the differences before you decide where it’s safe to generalize to human health.

The major impact on the fishing industry occurs not from fish oil processing but from restaurant serving of specific types of fish, which are clearly overfished. Krill, while not a fish, must be placed in this category for different reasons. While human fishing has gone on for millennium, krill fishing has not and represents a severe threat to a previously untouched biosphere that has caused negative sustainability impact in a matter of a decade. At this point, the capacity of aquaculture for the major formats of fish oil is stable and has more capacity to produce. As I mention above, my Ultra 85 is sourced from fresh water non-endangered species and processed using a nil carbon foot print technology, so it has minimal environmental impact. I do have to say that I anticipate others copying this, which may force us to rethink our sourcing yet again down the road when everyone else jumps on board.

As a final note I would say this: No matter what or how you choose to replete your Omega 3’s, you should use the Ideal Omega test to establish your baseline and follow your results. If you are eating a lot of fish, you really need to get your mercury levels tested in blood, hair and nails as well. Reducing your Omega 6 intake will concomitantly reduce the need for Omega 3’s but this is beyond what most people are willing to do in our society. Ultra 85 is a pure, clean and simple way to improve your Omega 3 levels and achieve this very desirable healthy balance of essential fatty acids.