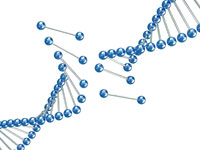 A couple of questions have been nagging at those of us who study telomeres and telomerase closely.

The first is – what is the correlation, if any, between tissue types? Typically we measure telomere length in the granulocyte line of White Blood Cells. These cells are typically responsible for fighting off viral infections and the immune surveillance against cancer.  How do the lengths that we measure correlate with other tissues? Limited studies have pointed to a good correlation with telomere behavior but not necessarily length. In other words, when someone has short telomeres in one type of tissue they will have short telomeres in another type relative to that type.  The numbers will not be the same but the tendencies will be.

Next, why is there variation in the speed at which telomeres are lost? It seems most of us lose a lot of telomere length relatively early in life and then sometime around late-middle age we slow down that loss. In old age there is a steady slow loss of telomere length unless you provoke it.

Finally, what is the major stress for telomere loss and how does it explain what happens to us when we get sick and/or age rapidly?

A most recent study has pointed to the following very important answers:

1)      The White Blood Cell Line we measure is probably the most important for two reasons. First, it does indeed correlate well with other tissues’ telomere behavior even though the absolute lengths are different.  The white blood cell line is capable – and actually required – to have tremendous ability to replicate because of the short lives of these cells and their high demand. This results in a line of cells that actually have the shortest telomeres among the cell types tested. The other lines had increasingly longer telomere lengths in this order: skin, fat, muscle. Once again it is important to understand that once you have established a relative “normal length” for the telomeres in each specific tissue type, you do see a correlation between “long” or “short” telomeres in each tissue type, basically making the White Blood Cell (WBC) measurement a reasonable surrogate for what is happening elsewhere.

2)      The variation in the speed of loss during life seems to depend on the need for each tissue to replicate.  The WBC are constantly replicating their entire volume throughout life. Early in life the amount of cells actually has to grow to meet the growth of the person from infant to adult. All the while there are immune challenges that have to be met for that child to reach a healthy adult state. That means lots of replication. Muscle cells, on the other hand, need far fewer replications to go from childhood to adult. They do not die off at nearly the rate WBC’s do and once they are there they simply grow larger rather than replicate to make more cells.  Skin cells turnover a lot so they behave more like WBC’s and fat cells behave more like muscle. The variation in the need for replication in each tissue accounts for the rapid telomere loss early in life and a slowing down later in life, since once the person is mature, only maintenance is required.

3)      The major stress for telomere loss is replication but here is the absolute super important fact. It affects the stem cells most. Recall stem cells are the parts bags we use to rebuild our bodies. Stem cells have only a small amount of telomerase (the enzyme that lengthens telomeres) to keep them young for a time, but they do age like other cells as we get older. This means they cannot keep pace with the need for replication and we start to age and get sick because of the combined loss of non-stem cell mass (typical cells) and the loss of our repair parts (stem cells).  When damage exceeds repair we get into trouble and age and get sick.

A couple of very interesting things also were backed up by this new study. First, inflammation is absolutely critical in accelerating the loss of both our typical cells and our stem cells, especially in the WBC line. Since they are part of the immune system, low grade inflammatory stuff like obesity, sedentary behavior, poor diet, smoking, lack of sleep and stress all accelerate their demise and burn out the stem cell lines. This is particularly true if you have high Omega 6 levels and low Omega 3 (fish oil) levels. So take enough fish oil to make a difference!

Next, certain specific behaviors can accelerate telomere loss in tissues that normally don’t see a lot of it.  We know that the cartilage cells in basketball players tend to have short telomeres.  The repeated jumping undoubtedly stresses the replication capacity of the stem cells of those tissues and burns them out faster. Similarly the muscles of long distance runners have shorter telomeres for the same reason – burned out stem cells.

There are two other things you can intuit from these findings. 1) Things that stimulate telomerase not only benefit regular cells but, in particular, stem cells.  This would mean that the natural telomerase activator TA-65 is a true stem cell stimulator. I’ve often said it has to be, but now we know why.

On the flip side, it is already known that EGF-1 one of the main ingredients in RG-Cell Super Stem Cell Activator have been shown to be telomerase activators. We are not making this claim for RG-Cell yet since it has not been specifically tested, but it is highly likely.

In summary, the above strongly support Fish oil, TA-65 and RG-Cell as the ultimate anti-aging combination! These are the telomere supplements you have been looking for!

Big Stuff!!! And speaking of Big Stuff, keep your eyes on my newsletters for a huge announcement any day now!

Things are getting really exciting!

What Causes the other “C”